ExecuJet Europe's fixed-based operation (FBO) at Berlin Schönefeld Airport has won the Shell Aviation Platinum Award for Safety and Quality in recognition of the operation's high level of service.

This latest accolade marks five consecutive years the Berlin FBO has been presented a Shell Award for Safety and Quality. The company previously won the Shell Gold Award in 2011 and 2012, the Shell Silver Award in 2010 and the Shell Bronze Award in 2009.

In addition, ExecuJet's FBO at Frankfurt am Main International Airport has won the Shell Bronze Award for Safety and Quality, after being in operation for just one year.

Gerrit Basson, Managing Director of ExecuJet Europe and COO of ExecuJet Aviation Group, says: "The teams at our Berlin and Frankfurt FBOs work hard to ensure a safe working environment and these prestigious awards recognise the high standards of safety ExecuJet provides."

Nicole Gut, Director European FBOs, ExecuJet Europe, adds: "We are especially proud that our Berlin Schönefeld FBO has been recognised five years in a row and our Frankfurt facility has been rewarded after only operating for twelve months."

ExecuJet offers the only full-service FBO at Berlin Schönefeld Airport, which will become part of Berlin Brandenburg International Airport when the facility opens. The FBO provides services including a VIP passenger lounge and conference room, a crew lounge and briefing room, water services, catering, limousines, towing and fuel supply, as well as landing permits and hangar parking space. ExecuJet Europe is also the official operator of the airport's General Aviation Terminal (GAT), responsible for the handling of all business aviation movements.

ExecuJet's Frankfurt FBO has a VIP lounge and a separate crew lounge, with internet and computer facilities, plus catering on demand. The Frankfurt FBO also provides fuelling services with a dedicated fuel truck from Shell Fuelling.

Shell recognizes operational excellence in the area of HSSE and Compliance.
Airports are assessed annually against 8 key HSSE and Compliance criteria that allows them to gain a Bronze, Silver, Gold, Platinum or Double Platinum award depending on their performance consistency from year to year. In 2013, Shell Aviation also included one Diamond award globally for the "Best of the Best" aviation operation. This scheme has enabled Shell Aviation to demonstrate a year on year improvement in HSSE and Compliance performance in order to provide the best possible service to Shell customers. 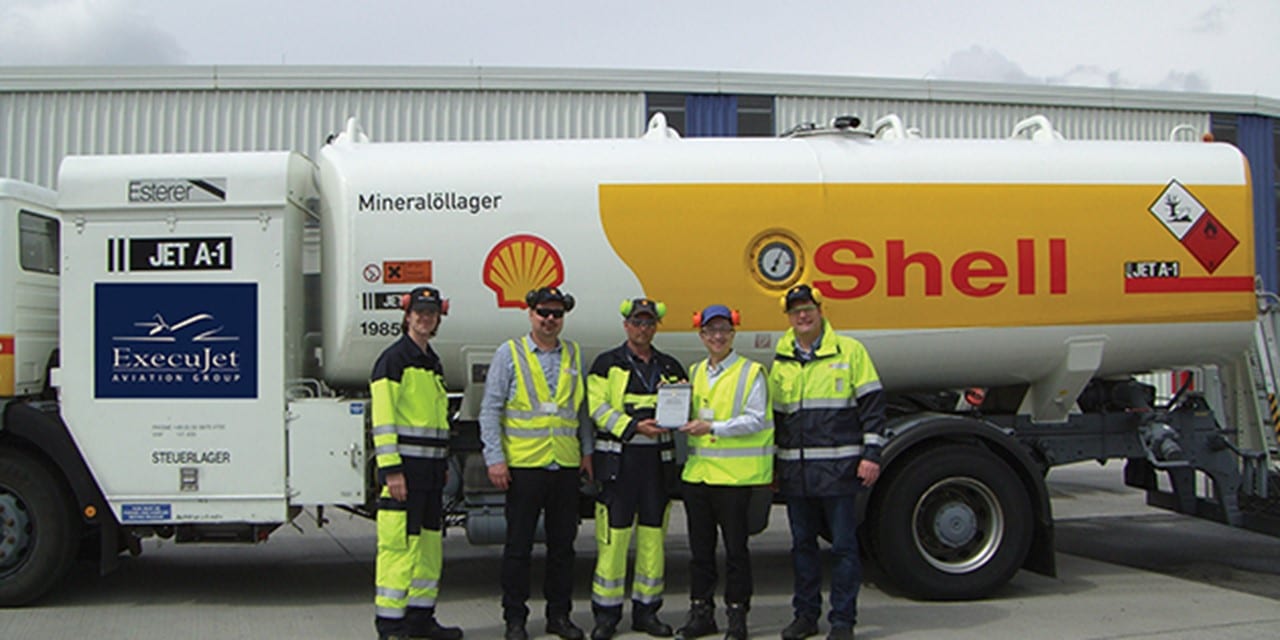